Chapter 8: The Importance of Carbon for Climate Regulation

In the previous chapter we have explored how the concentrations of two atmospheric gases, carbon dioxide and methane, contribute significantly to the recent warming of the Earth through the so-called greenhouse effect.  Both of these gases are carbon based, and thus it is obvious that the processes that determine the abundance of these gases in the atmosphere are of considerable interest for our understanding of world climate.   The movement of carbon between the biosphere, atmosphere, oceans, and geosphere is described by the carbon cycle, the components of which are illustrated in the diagram below.

The components of the Carbon Cycle

Within this cycle there are various sinks or stores of carbon (see table below),

and the study of the carbon cycle basically means that we want to know how carbon is exchanged between these reservoirs, and at what rate.  The approximate rates of carbon exchange are shown in the picture below.  The amounts indicated are in gigatons of carbon per year.

Because we are most interested in the carbon in the atmosphere, we can start by examining what kinds of carbon exist in the atmosphere, and how they get there.  Two major aspects are photosynthesis (removes CO2) and respiration (adds CO2) of animals and plants, which are related to the current mass of organic carbon, carbon dioxide, and oxygen at the Earth's surface.  Because organisms are so intimately involved in carbon cycling, the carbon cycle is considered a  biogeochemical cycle.

The Oceans:  Another major exchange of CO2 occurs between the oceans and the atmosphere. Carbon dioxide enters the waters of the ocean by simple diffusion, and ocean waters and atmosphere are essentially in equilibrium with respect to CO2. Once dissolved in sea water, the carbon dioxide can remain as is or can be converted into carbonate (CO3-2) or bicarbonate (HCO3-) ions. Certain forms of sea life biologically fix bicarbonate with calcium (Ca+2) to produce calcium carbonate (CaCO3) . This substance is used to produce shells and other body parts by organisms such as coral, clams, oysters, some protozoa, and some algae. When these organisms die, their shells and body parts sink to the ocean floor where they accumulate as carbonate-rich deposits. After long periods of time, these deposits are physically and chemically altered into sedimentary rocks (limestones). In addition, organic matter from dead organisms can also be incorporated into oceanic sediments. Ocean deposits are by far the biggest sink of carbon on the planet (see table above). Owing to its large reservoir of reactive carbon (see table above) and the long timescale of its turnover, the ocean effectively controls atmospheric CO2 levels on the time scale of millennia. It is the dynamic balance between the CO2 content of the atmosphere (via dissolution into ocean waters) and the biologically driven net transport of organic (dead plant and animal matter) and inorganic carbon (calcium carbonate) to the deep ocean (biological pump) which largely determines the atmospheric CO2 levels. It has been shown by modeling that the effect of the biological pump in a pre-industrial scenario was a drawdown of 180 ppm CO2, which is more than twice the current man made perturbation.

The Biological Pump:  This basically is an expression that describes carbon removal from the atmosphere by organisms.  Organisms remove CO2 from the atmosphere by photosynthesis (on land and in the oceans) and through construction of calcium carbonate hard parts (shells, skeletons, etc.), and a portion of the created material (shells and organic matter) is buried in sediments before it has a chance to re-oxidize into CO2.  The processes of biogenic particle formation, modification and sedimentation which together constitute the biological pump are affected by atmospheric forcing, upper ocean physics and ambient chemical conditions, all of them expected to be modulated by future climate change. The biological pump therefore is subject to various positive and negative feedback processes. Ocean biology is both involved in the control of climate and sensitive to climate change.  The efficiency of the net drawdown of CO2 (by the biological pump) varies regionally in dependence on species composition and food web structure.  Removal of carbon from the ocean-atmosphere system also has the effect that the oxygen that was split of from CO2 during photosynthesis to produce the buried organic matter can not recombine with carbon to form CO2, and thus has to remain in the atmosphere.  Thus, an increase in the rate of carbon burial tends to push up atmospheric oxygen levels.

Fossil Fuels and Land Use: Two other important processes that have an impact on the CO2 content of the atmosphere are fossil fuel burning and changing land use. In fossil fuel burning, coal, oil, natural gas, and gasoline are consumed by industry, power plants, and automobiles. This material had been removed from the atmosphere over many millions of years, and now is returned within a few centuries.  Changing land use is a broad term which encompasses a host of essentially human activities. They include agriculture, deforestation, and reforestation. Deforestation, for example reduces the amount of CO2 sequestered by land plants, and bad agricultural practices that lead to desertification have a similar effect.

The Geological Processes involved in the Carbon Cycle are shown below, as well as the essential chemical reactions. 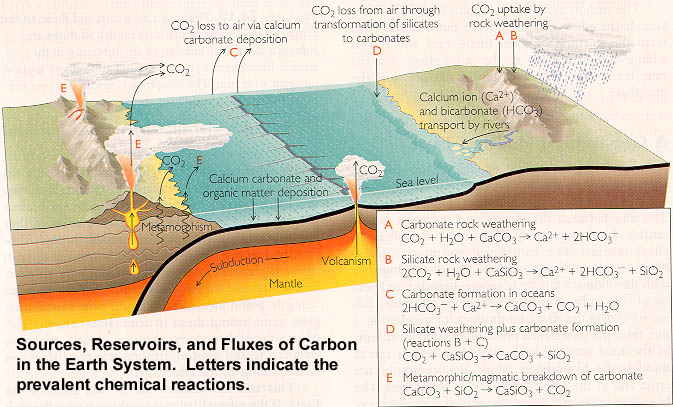 As we can see, geologic processes contribute CO2 to the atmosphere by three main routes:

These gains in CO2 are balanced by other processes, in particular during weathering, when silicate minerals undergo hydrolysis.  In addition, the burial of carbon in the form of organic matter (coal etc.) and as limestone (linked to the bicarbonate ion that forms during weathering), removes carbon from the cycle and lowers atmospheric CO2.   Because organic matter is a product of photosynthesis (where C and O are split), the burial of organic carbon increases atmospheric oxygen, because the liberated O2 can not recombine with the carbon is was originally split off from.

The carbon cycle is obviously very complex, and each process that we have illustrated above has an impact on the other processes.  Thus, modeling the carbon cycle is not easy.  What we do know is that the carbon cycle must be a closed system; in other words, there is a fixed amount of carbon in the world and it must be somewhere. Because atmospheric CO2 is considered an expression of the balance between the various reservoirs and processes involved, scientists are actively investigating the carbon cycle to see if their data do indeed indicate a cycle that is in dynamic equilibrium. A link to another visualization of the long term global carbon cycle.

Coupled Elemental Cycles :  Processes involved in the carbon cycle are coupled with other elemental cycles, namely those of oxygen, nitrogen, iron and silicate.  All of these have strong potential to influence the functioning and strength of the biological pump. For example: the oceanwide mean, and local variations of nitrogen availability in a given year exerts control of new production and primary particle export.  It has also been shown that low iron availability in areas remote from continental sources can partly explain the observations that fixed nitrogen (and other micro nutrients) remain under-utilized in large areas of the oceans. Here the biological pump works below its maximum potential. Changes in land use, the water cycle, atmospheric wind patterns or the balance between the relative supply rates of nitrogen, carbon,  and iron potentially control the efficiency of the biological pump in these regions. The link between the silica and the nitrogen/carbon cycle is yet another example of how the efficiency of the biological pump is affected by another inorganic elemental cycle. In highly productive regions of the oceans, diatoms (algae with a silica skeleton) are the main primary producers.  A shortage of silica will lead to an underutilization of other nutrients, and thus a smaller amount of carbon removal.

Carbon and Life:  From the time when the first living organisms coalesced in a sea permeated with long-chained molecules, carbon has been essential to life on earth. Carbon’s importance arises from its crucial provision of both structure and energy to living creatures. Carbon’s very long chains and rings are the backbones of most organic molecules. Break living bodies of any sort into organs, break the organs into cells, and the cells into molecules, look inside, and you will find a string of carbon atoms. If you could somehow pull all these carbon strings from the organism, little would remain of either the organism’s form or function. Carbon also flows through organisms and, when doing so, provides the energy that allows them to perform the various functions that we associate with being alive. This energy comes stored in the molecular bonds that hold the carbon chains together.